Nigerian singer Balogun Ayodeji popularly known as Wizkid has taken to his social media page to express gratitude to the men who changed his life forever.

Taking to his Instagram stories, Wizkid shared a photo of singer Banky W and his friend Tunde Demuren to thank them for taking a chance on his music career when they signed him on their record label Empire Mates Entertainment (EME) in 2009.

The father of three rose to prominence after releasing Holla at Your Boy and has been winning awards and collaborating with international acts.

Wizkid, who is working on releasing his new album Made In Lagos, seemed to have looked back and seen how far he has come from 2009 to 2020.

Expressing his gratitude to the men, the Ojuelegba crooner stated that they changed his life forever. 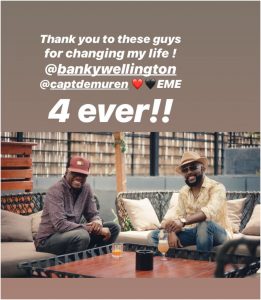 READ ALSO:    Banky-W Reveals Wizkid’s Dark Past, You Must Read This

The musician also dedicated his soon-to-be-released album to his three sons, Bolu, Ayo, and Zion.

It was earlier reported that the singer featured his three boys in the official music video for Smile.

The Cause Of Football Legend, Diego Maradona’s Death Revealed

I Am Number 1 – Burna Boy Boasts After Grammys Nomination