A local paper in Tanzania, Tanzania Perspective has reported that Madagascar’s President Andry Rajoelina was allegedly offered USD twenty millions ($20m) by the World Health Organization (WHO), to add some little poison in the herbal drink they had manufactured to heal COVID-19.

In a statement credited to the president, the local newspaper published this in its headline: WHO Offered Me $20m To See COVID-19 Medicine Poisoned- Madagascar President.

Andry Rajoelina said that “People be vigilant, the World Health Organization that we have joined by thinking that it will help us, is there to kill Africans.

READ MORE: Presidency Reacts As Dokpesi Says Every Drug We Were Given Were Malaria Medications

My country Madagascar has found a cure for Coronavirus but the Europeans have told me a proposed $20,000,000 to put toxins in this remedy to kill my African friends who will use it. I ask all Africans not to use their Coronavirus vaccine, because it’s killing.

They have put poisons to kill only the Africans as they wanted to do with the vaccines that we protest.

While the authenticity of this allegation is yet to be ascertain; here is a copy of the newspaper: 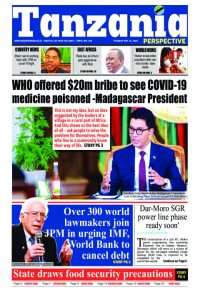 Meanwhile, in our usual style of confirming our stories, we sent a message to WHO Regional Office For Africa via its social handle on Twitter, but until now no response after 24hours.

READ MORE: Here Is The Truth About Madagascar’s  COVID-19 Vaccine As Narrated By FG

However, WHO has noted that the herbal drink should be tested to see if it is effective as the organization has no evidence the drink works, according to the head of the group’s Africa office.

When Matshidiso Moeti at the WHO Regional Office for Africa was asked recently about the drug, she said: “No, we do not.”

She said the WHO’s director-general Tedros Adhanom Ghebreyesus would soon be speaking with Rajoelina about the purported remedy. Moeti said the WHO supported the use of traditional medicine in African healthcare systems but studies must be carried out to see if they work.

Meanwhile, Nigeria has taken delivery of the Madagascar’s COVID-19 Vaccine today but the president who had earlier claimed he received the vaccines as a gift from Madagascar’s president has promised to listen to scientists and  doctors before the drug would be administered.

How EFCC Chairman, Magu Spent Last Night In A Police Cell, Says It’s The Will Of Allah