Tiger Woods has issued a public statement roughly 15 hours after being arrested for DUI in Jupiter, Florida. Woods indicated in his statement that alcohol was not involved, and that his condition resulted from “an unexpected reaction to prescribed medications.” 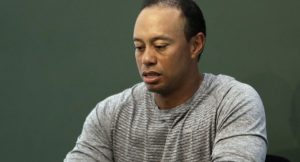 Here is Woods’ statement: “I understand the severity of what I did and I take full responsibility for my actions,” Woods wrote in his statement. “I want the public to know that alcohol was not involved. What happened was an unexpected reaction to prescribed medications. I didn’t realize the mix of medications had affected me so strongly.” Woods apologized to his fans and pledged to “do everything in my power to ensure this never happens again.” Woods closed his statement by thanking the Jupiter Police Department and the Palm Beach County sheriff’s office.

Woods is currently recovering from surgery that will keep him sidelined through at least the summer.