Many have thought that the Award-Winning Nigerian singer, Wizkid will be using Apple iPhone 11 Pro Max but to their surprise, he said he has been using Tecno Camon 15, a phone of N65,500.

Wizkid made this known replying a fan who was surprised he tweets with an android phone.

READ ALSO: BBN Winner, Mercy Eke Is Bitter And Here Is Why

The fan with the username @Distinct_Vibes was surprised the African Starboy tweeted with an Android phone.

Wizkid noticed the comment and decided to bless the fan with a rare reply.

“I use Camon 15 every day” he retweeted and replied the fan, the Joro crooner replied.

See the exchange below ; 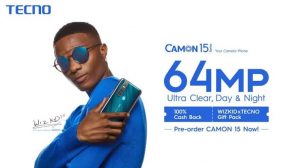 However, wizkid was on April 18 announced as the new brand ambassador for mobile phone giant, Tecno.

READ MORE: Wizkid Tears Internet, Got Everyone Talking For Doing This

Wizkid’s success runs side-by-side with the emergence of Nigeria’s mobile entertainment market. So, it didn’t come as a surprise when announced was made by the phone company.

According to the company, stories like Wizkid’s illuminate the possibilities that are offered to both producers and consumers especially with the development of digital entertainment.

“My Wife, My Daughter And I Have Recovered From COVID 19” – Dr Okowa