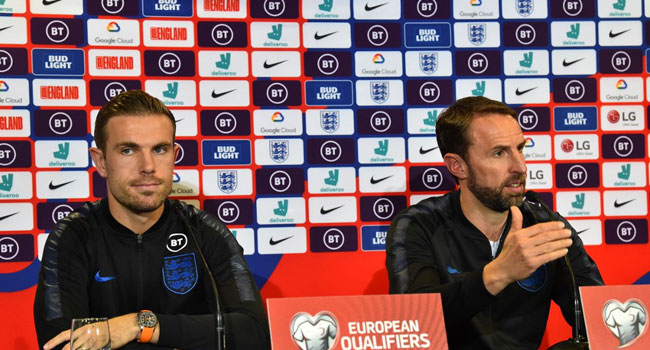 England manager Gareth Southgate is to meet with his squad ahead of their Euro 2020 match in Bulgaria next month and discuss what measures they might take if they are subjected to racist abuse.

One Bulgarian fan was arrested for “discriminatory abuse” directed at Raheem Sterling during the 4-0 win over Bulgaria last Saturday at Wembley, although he was subsequently released without charge.

A previous England team have already experienced racist abuse in Bulgaria in 2011 — Southgate’s team also were showered with abuse in a Euro qualifier in Montenegro last year.

Bulgaria’s Stadion Vasil Levski will be partially closed for the matches with England on October 14 and Czech Republic in November because of the racist behaviour of fans in June.

A total of 5,000 seats of the 46,000 capacity stadium will be closed off for the England visit and 3,000 for the Czech Republic match — and a banner with the wording “#EqualGame”, with the UEFA logo on it will be displayed over the seats.

“It is a concern, we’re not confident that we’ll go there and nothing will happen,” Southgate said, adding that the meeting to address the issue was “already planned.”

“We’ve already planned what our schedule looks like and we’re going to discuss it with the players before we go, because we’re aware that there is history there and we want to make sure that we’re all prepared for what might happen and how we want to respond.”

UEFA ordered the partial closure of Bulgaria’s national stadium following racist behaviour by their fans in Euro 2020 qualifying games against Czech Republic and Kosovo in June.