Nigerian gospel music star, Yinka Ayefele in a recent post thanked God for the new building of his radio house situated in Adoekiti, the capital of Ekiti state, Nigeria.

Yinka Ayefele via his official facebook page with 945,773 followers was filled with appreciation saying: “see what God has done for me” he wrote In Yoruba. 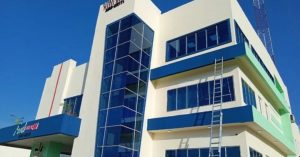 The music star also stated that National Broadcasting Commission(NBC) came for the final inspection to the radio station.

He wrote: “…And the NBC came for final inspection…Professionalism nurtured by experience. We are good to go.Please follow us on instagram @ Freshfmadoekiti.”

Recall that in August, 2018, Outrage was in Ekiti over demolition of Ayefele’s radio station by Oyo state government.

People discussed the demolition in Adebayo area of Ado Ekiti,on Sunday, with obvious feeling of resentment, with many of them questioning the timing of the demolition.

Ayefele is from Ipoti-Ekiti, a city in Ekiti State. He and his wife, Tope, welcomed in a set of triplets, 2 boys and 1 girl on January 18, 2019 at Holy Cross Hospital in the USA.

BBNaija: Liquorose Breaks Down In Tears At Saturday Night Party