Claudio Ranieri’s Leicester fairy tale may have come to an ignominious end in the soulless surrounds of a Radisson Blu hotel next to East Midlands Airport hotel on Thursday, but the origins of his demise can be traced to a scorching hot Californian afternoon last July.

Leicester’s trip to Los Angeles to participate in the International Champions Cup had already threatened to turn sour, with players grumbling about the 11-hour flight and Ranieri appearing unusually jaded and irritable throughout the trip.

Yet arguably the most telling sign that all was not well with the club who had been crowned English champions for the first time two months previously came when owner Vichai Srivaddhanaprabha and another senior board member bizarrely decided to monitor a training session from high chairs. It was a telling symbol of a club struggling to adjust to its new lofty status, and one suddenly under a level of scrutiny and expectation unprecedented in its 133-year history.

That struggle – for Ranieri, at least – effectively came to an end with the embarrassing FA Cup defeat by Millwall last week, a result which proved the final straw for Srivaddhanaprabha and prompted him to enact a sacking that has polarised opinion across football. He must feel like the man who shot Bambi’s mother.

Ranieri was on his way regardless of the 2-1 Champions League defeat to Sevilla but a meeting with senior players in the team hotel – called by Srivaddhanaprabha – sealed his fate. 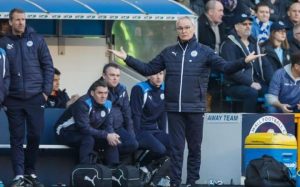 Those players were asked if there were any issues in the dressing room, as reported by Telegraph Sport earlier this month, and the answer was an unequivocal “yes”. The message was that relegation was inevitable unless a change was made.

Even as recently as Wednesday, the decision to drop Demarai Gray and play £15million flop Ahmed Musa in Seville bewildered the players. One source said: “It was no surprise because he has been making crazy decisions all season.” Another described how the players felt “flat as f—s”.

There have been other incidents, too. Ranieri’s methods and tactics have been confusing and angered players and staff. It is alleged that he barely spoke to No2 Craig Shakespeare, a popular member of the dressing room, and there was disquiet after Ken Way, a sports psychologist who worked with the players last season, was summarily dismissed just after the start of the new season.

Earlier this year when Leicester’s players held talks to force a return to the tactics of last season, essentially 4-4-2 with the plan to counter-attack, Ranieri waved them away and insisted there should be only one voice at the club.

His press conferences had also been a source of irritation. His custom of shaking the hand of every journalist remained but the words he used to describe their struggles jarred with players, who believed it underlined his diminishing grasp of the situation.

Those players will be under huge scrutiny now. There have been accusations of a revolt led by senior players, including Kasper Schmeichel and Jamie Vardy, evoking memories of Jose Mourinho’s exit from Chelsea last season.

In truth, Ranieri cannot be blamed for everything about Leicester’s astonishing decline. The club have struggled to address key issues since becoming champions and there have been too many over-promotions in significant roles behind the scenes.

The role of Jon Rudkin, the director of football and close to the Srivaddhanaprabha family, is under the microscope and the question has to be asked whether he has fulfilled his remit properly.

Recruitment over the summer was abysmal, while the policy over new contracts bred resentment in the dressing room among the players who went unrewarded. The decision to present players with BMWs also went down badly with long-serving members of staff who felt their roles had been ignored.

Alarm bells were ringing after the defeat at Watford in November yet the board still felt compelled to issue a statement declaring their “unwavering support” just under three weeks ago. It was an ultimatum to the players, effectively informing them to buck up their ideas.

But the dreadful performance at Swansea in a 2-0 defeat which left them hovering above the dreaded dotted line made Srivaddhanaprabha realise that the statement had been a waste of time.

The defeat by Millwall signalled the end, but Leicester could not travel to Seville without a manager so he was given that game as a farewell.

Gary Lineker has admitted he shed a tear on hearing about the sacking – and it is impossible not to feel sympathy for a man who radiated warmth and was always a pleasure to deal with.

After winning the title he privately told us that next season would be even more difficult dealing “with the sharks”, as he liked to call the press.

However, it was the big fish in the dressing room which ultimately did for him.