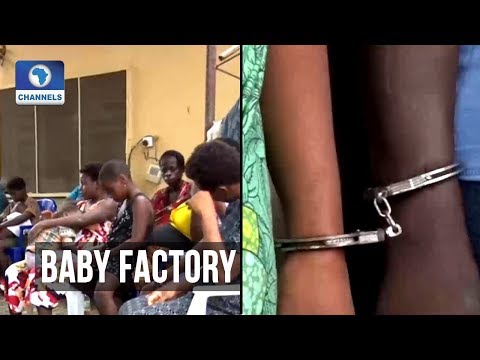 The Lagos State Police Command has uncovered a baby factory from a detention camp in the Ikotun area of the state.

The police also rescued 19 pregnant girls and a day-old-baby.

The victims, some of whom are between ages thirteen and twenty eight, were allegedly lured to Lagos with promises of jobs.

One of the victims, Hope Bright from Rivers State who narrated her ordeal said her two-year-old child whom she came with from the village was snatched from her.

“As I reached there, the woman checked me. Suddenly, my stomach started kicking me. From there, they said that I will born.

“They took me to the hospital, God helped me I delivered that child, but the baby died,” she said.

When asked where the baby is, Bright who broke down in tears said: “They collected the baby from me, i did not see that child again.”

Channels Television gathered that the arrest was made after several weeks of monitoring and information gathering by the Police.

Among the suspects arrested are the care givers, nurse to the syndicate and the hotel operators where the leader of the gang lodges the victims awaiting child delivery.

Briefing Channels Television, one of the suspects and the hotel operator said: “At the spot, madam searched my hotel and discovered four women with pregnancy and one baby.”

Wizkid May Be In Trouble For Saying This About Buhari