Investigation recently conducted by benconews.com has revealed that Chi limited hasn’t desist from producing and distributing poisonous juice into the market, thereby putting children at greater risk.
Few months ago, a clarion call was made to all mothers in the country to warn their children from taking Caprisonne, one of the packaged fruit juices in the market greatly sought after especially by children between the age bracket of one and 12. The news which went viral in majority of the social networking sites and online media then indicated that there are fake batches of Caprisonne out there in the market.
After that clarion call, Chi Limited, the producer of Caprisonne embarked on a massive media campaign to correct the obnoxious odour, with the tales that there was a mix up somewhere.
But right now, fresh investigation has revealed that Chi Limited has returned to market with the same poisonous products. 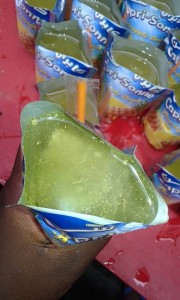 A recent case was recorded with contaminated Capri-Sonne fruit juice drink, children delight, A brother to a woman who bought a carton of Capri-sonne drink for her children has taken to twitter to tell Nigerians to be aware of the product. As seen in the photos, the newly bought products which read… MFD: 22/05/15 and BB: 21/02/16 already looks contaminated and has some particles and pebbles inside. Capri-sonne’s producing company is presently having little or no control over the widespread as they could not recall products that have already reached the end consumers in the public. 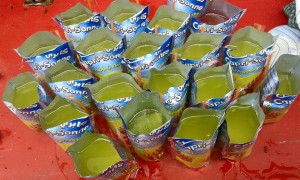 Over the years food poison related issues has been another unending panorama in Nigeria food industry but some companies worked so hard to keep their head up in ensuring safety of their consumers with strict quality controls measures but unfortunate chi limited a conglomerate of TGI with diverse business interest in household product especially the consumables ranging from food to healthcare has joined the bandwagons.
With this development, mothers are advised to check the reserve cartoon in their various homes to ensure they prevent their kids from a looming danger which might occur as a result of poisonous fruit drinks from CHI Limited. Efforts to reach Chi Limited spokesperson proved abortive as his contacts were not reachable. However, watch out for the part two of how Chi Limited is enslaving Nigerians.