It is often said that behind every successful man, there is a good woman. This old maxim has proved to be true in the life of visionary man of God, Bishop Dr. Bishop Chris Kwakpovwe of Our Daily Manna whose ministry has continued to witness tremendous growth. 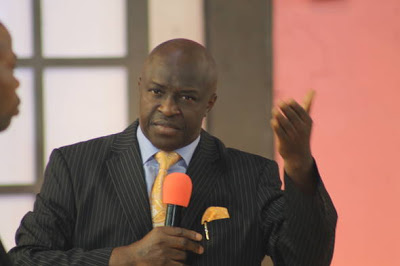 Today the Bishop is a wealthy and successful man of God, but what many have failed to note is that before striking gold in God’s vineyard, the down-to-earth man has also had his own share of poverty.

Sources said when he started, he could barely afford three-square-meals and his problem was compounded when his first wife moved out of their matrimonial home. Things were so rough for him to the extent that he attempted to take his own life, but he was saved by a Good Samaritan.

Before things fell apart for him, Dr. Chris was actually earning fine and living large as a well trained pharmacist working in one of the biggest pharmaceutical companies. But things took the downturn when he decided to answer God’s calling. His wife was not happy with this decision and she had to move her things out of the house. And after several failed moves to bring back the estranged couple, their marriage was dissolved in a court of law.

But as God would have it, shortly after parting ways with his first wife the pastor met another woman called Flora who is now his legal wife. Meeting Flora was a blessing for the clergy as doors of opportunity started opening.

Now Fourteen years down the line, the couple has continued to count their blessings. But for people who know the humble beginning of the pastor, they still remark Flora as the pillar of support in the life of the clergy, a woman of substance who complements her husband by coordinating all other affairs under the Manna Prayer Mountain.

Africa Day: DJ Cuppy Reveals The Best Thing That Ever Happened To Her