On Thursday (21 May) morning, the “Summertime Sadness” singer shared a lengthy Instagram post expressing her frustration at being “crucified” for singing about “emotionally abusive” relationships where other female performers hadn’t faced the same criticism.

However, Lana Del Rey has confirmed that her new album will be released in September and will address the double standards she has experienced as a woman in the music industry.

Del Rey wrote: “Now that Doja Cat, Ariana [Grande], Camila [Cabello], Cardi B, Kehlani and Nicki Minaj and Beyoncé have had number ones with songs about being sexy, wearing no clothes, f***ing, cheating etc – can I please go back to singing about being embodied, feeling beautiful by being in love even if the relationship is not perfect, or dancing for money – or whatever I want – without being crucified or saying that I’m glamourising abuse??????”

She continued: “I’m fed up with female writers and alt singers saying that I glamourise abuse when in reality I’m just a glamorous person singing about the realities of what we are all now seeing are very prevalent emotionally abusive relationships all over the world.

“With all the topics women are finally allowed to explore… I think it’s pathetic that my minor lyrical exploration detailing my sometimes or submissive or passive roles in my relationship glamorising made people say I’ve set women back hundreds of years.”

Del Rey explained: “I’m not a feminist – but there has to be a place in feminism for women who look and act like me – the kind of woman who says ut men hear yes… the kind of women who get their own stories and voices taken away from them by stronger women or by men who hate women.” 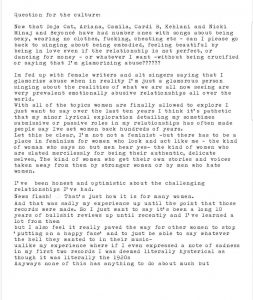 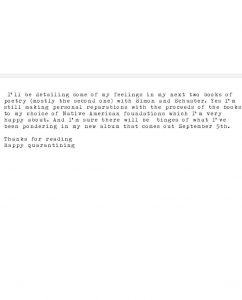 Lana fans realizing lana put them in a war against 7 fandoms pic.twitter.com/cROOdTjra0

Lana rn watching everyone get mad after she spoke facts😌 pic.twitter.com/PFHRiFHgjo

lana….we were all rooting for you. why did you have to name drop them? Just say what you had to say and go finish the album babes 😪 pic.twitter.com/OzulFtcBxq

Why couldn’t Lana just do a statement like Melanie did

Lana Del Rey said “There has to be a place in feminism for women who look and act like me.” Girl you’re a white women. pic.twitter.com/zgl6oN9Ykv

The Karen jumped out of Lana!! Here we have 4 beautiful woman!!✓ pic.twitter.com/Ymq3RdcvDE

I woke up to my queen Lana trending for all the wrong reasons 🙁 simply bc y’all can’t tell the difference between someone coming for your faves or using them as an EXAMPLE. Sure the name drop was unnecessary, but stop overlooking the point. #LanaDelRey pic.twitter.com/3ocSPE6RyY

Lana Del Ray is a KAREN.

the funniest thing about lana’s post is she named kehlani, like damn kehlani doesnt even have a #1 yet pic.twitter.com/0hc3VGvBJP

How Lana Del Rey is sleeping after posting that letter on Instagram. pic.twitter.com/okcJ7LRXHO

lana needed to namedrop drake post malone justin bieber and 6ixnine. and everyone would be on her side. instead she does THIS pic.twitter.com/pj2S3r1vka

Lana is dating a cop so the compatibility speaks for itself pic.twitter.com/foPrc1gw7Q

Brown lana fans realising they can't defend the nword against brown people who use it,coz lana be on her racist shit 😭 pic.twitter.com/b3ZMJng6AO

Nicki: People will love you and support you when it's beneficial

Lana: My pussy tastes like Pepsi-Cola” by ”Cola” pic.twitter.com/9Xn0enxAg9