A Nigerian lady, Amaka Enekwe, (pictured right) has died three weeks after she lost her sister, Onyinye, in the Ikoyi building collapse.

It was learnt that Onyinye, 26, who was preparing for her wedding in December, was among the 43 persons who died in the unfortunate incident in Ikoyi.

Onyinye worked as a second personal assistant to Femi Osibona, owner of Fourscore Homes, and had just resumed work a week before the tragic incident.

READ ALSO: Anambra Election, One Of The Most Difficult Ever – INEC Chairman, Mahmood Yakubu

According to her,  Amaka was ill and was believed to be recuperating, only for her to die on Monday, November 22.

Her post read: “Exactly 3 weeks after the death of your younger sister at the Ikoyi building collapse, you followed her. Losing two daughters in a space of three weeks is a pain too terrible for a mother to bear.

“When we visited you on Monday you were recovering only to hear of your death today. Amaka why did you follow your sister??. Your mother is trying to be strong, she is trying to hide her pain by singing praises to GOD and laughing when we visited today but she is losing it. 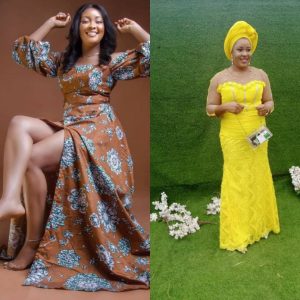 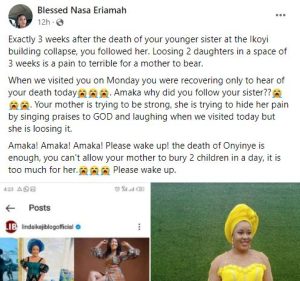