This time around, the rhythmic mix-tape is loaded with 55 hit tracks, many of which are people’s favourite.

At the moment, the song is gaining much downloads on the internet and would be ready for the music shelves soon. 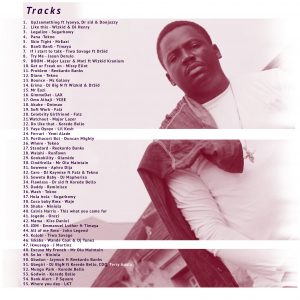 Meanwhile, in his quest for greatness, the maverick turn-table expert has been working tirelessly to take over the streets, clubs and the entire Nigerian music industry with his lovely and catchy mixtapes. According to sources, he’s been working on hits upon hits with talented A-list acts in the studio with the hope of releasing them in his next mixtape.

A graduate of Bio-Chemistry from the Lagos State University, Ojo, Lagos, DJ Turbo D is well-adored in the music industry based on his dynamism and unrivaled talent on the wheel of steel. At a tender age, he’s also bagged numerous awards across the country in the last 10 years of his professional career.

At the moment, apart from being signed to the SMD MAVIN Record’s as the official DJ to one of Nigerian’s most celebrated artistes; Korede Bello, he’s also one of the top disc jockeys on Eko FM in Lagos.
Turbo D loves reading and listening to music and above all he’s a devout Christian.

BBNaija: Liquorose Breaks Down In Tears At Saturday Night Party