There was an outbreak of violence at the headquarters of the All Progressives Congress (APC) in Abuja on Monday. A large number of youths arrived the secretariat of the party where APC leaders are holding a meeting over the Kogi state election. They came in buses marked ‘Dekina’, a local government area in the‎ state. On sighting Yahaya Bello, who arrived at 2:48pm, they went out of control, attempting to attack him. It took the effort of security agents to smuggle Bello from their midst. After Bello was rescued, they s‎tarted hurling missiles and using big sticks to beat up one another. Security personnel later restored calm but broken windshields of cars were at the scene of the chaos.

Meanwhile, the All Progressives Congress (APC) has confirmed Yahaya Bello as its candidate for the December 5 supplementary election in Kogi state, with James Faleke, running mate to the late Abubakar Audu, vowing to challenge the decision. The party announced the choice of Bello at a meeting which held at its headquarters on Monday. Bello came second in the August 28 primary, which produced Audu as candidate for the substantive election. 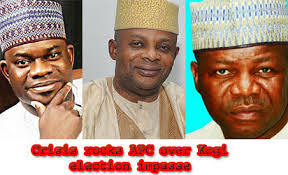 The Independent National Electoral Commission (INEC) had declared the November election as inconclusive because the margin between the two leading contenders in the poll was less than the number of cancelled votes. While 49,953 votes were voided in the election, the margin between Abubakar Audu of the All Progressives Congress (APC), who was leading, and Idris Wada, the incumbent governor and candidate of the Peoples Democratic party (PDP), was 41,353. Audu secured 240,867 votes, while Idris polled 199,514 votes.

Subsequently, INEC said it would conduct a supplementary election and asked APC to replace Audu, a decision which Faleke opposed, asking that he be declared as governor-elect. Earlier on Monday, Faleke picked Mohammed, Audu’s son as his running mate, saying he was doing it in line with the decision of the party. However, when the party announced that it had adopted Bello, the deputy governorship candidate in the substantive election, vowed to challenge the decision in court.

“We are going to challenge the decision of the party in court…  The party took the decision and just invited us,” he said. “I want to make it very clear that Alhaji Yahaya Bello did not take part in all our campaign process and we are only contesting election in 91 polling units out 2, 548 there about polling units and we have made it very clear that if they go ahead to conduct election because I have pulled out that election would be challenged in the court of law, it will be null and void.

“We won’t be addressing you today if the party out of honour and the path of honour we championed there is for the party to go to court and challenge INEC and Mr Chairman told us directly right away without considering it twice that the party will‎ not go to court and since the party is not going to court we have taken it upon ourselves as our right to defend ourselves in court and we are challenging the decision.”

Meanwhile, INEC has confirmed receiving the request of the APC to replace Audu’s name with that of Bello. Nick Dazang, INEC deputy director of publicity, disclosed this in an interview with NAN in Abuja. “They have sent the name of their replacement candidate, the second runner-up in their primaries, that is Yahaya Bello, to the commission,” he said.

Buhari Told To Declare His Assets, Recommit To Transparency