The man was reportedly kidnapped by armed kidnappers at his filling station in the Bakin Tasha region at 7:35 p.m. on Friday, November 12.

DSP Abdullahi Haruna Kiyawa, the command’s spokesperson, confirmed the rescue to newsmen, saying that after receiving word that the man had been kidnapped, the command went into action right away.

“On receipt of the report, the Commissioner of Police, Kano State Command, CP Sama’ila Shu’aibu Dikko, raised and instructed a team of Operation Puff Adder led by CSP Usman Maisoro to rescue the victim and arrest the culprits,” he stated.

The PPRO explained that the kidnappers released the victim after the police mounted pressure on them.

With combined efforts of local Vigilante and members of the community, the kidnappers were trailed and with sustained follow up, they released the victim unhurt on the same date at about 2020hrs and fled. More Puff Adder teams have been deployed and were directed to ensure the arrest of the culprits,” Kiyawa added.

In other news, Nigeria’s famous author Reno Omokri has doled out some advice to people who regard themselves as celebrities on social media and live exorbitant lives.

According to him, these self-acclaimed celebrities tend to buy a Range Rover the moment they start seeing money. They later start chasing designer bags just to revamp their celebrity status. Oh yes, you will start seeing them in First Class Planes.

Reno has left a very short message for these self-acclaimed celebrities. According to him, after living larger than life and you turn broke in your old age, you shouldn’t blame your fans for not being kind when they refuse to contribute something to sustain you.

”You say you are a celebrity. So you get money. First thing you buy is a Range Rover. Next are designers. Then you flying First class. No problem. 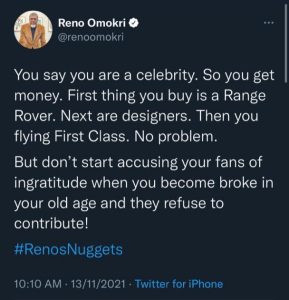