The Kaduna State government has announced that it will commence the implementation of the New National Minimum wage from September 1, 2019.

The Special Adviser to the governor on Media and Communication, Mr Muyiwa Adekeye, disclosed this to Channels Television on Monday.

He made the disclosure at the end of the State Executive Council meeting chaired by the deputy governor, Mrs Hadiza Balarabe.

Adekeye explained that the Council approved that payment of the new national minimum wage and consequential adjustments to civil servants should begin from September.

He said the approval was part of the commitment of the Nasir El-Rufai administration to strengthening public service and its capacity to deliver quality and responsive service.

In arriving at the decision to pay the N30,000 minimum wage, Adekeye explained that the government considered several scenarios, bearing in mind the trend of Internally Generated Revenues and allocations from the Federation Account.

He noted that paying the new national minimum wage and consequential adjustments would increase the wage bill of the State Government by 33.

The governor’s aide added that the development would increase the gross monthly salary outlay from N2.827billion to N3.759billion.

According to the new wage structure, the lowest-paid workers in the Kaduna State Civil Service will enjoy increments of as much as 67% while middle-ranking officers from Grade 10 to 14 were awarded increments of 60%.

The state government also confirmed the approval of the N30,000 minimum wage in a statement.

Read the full statement below: 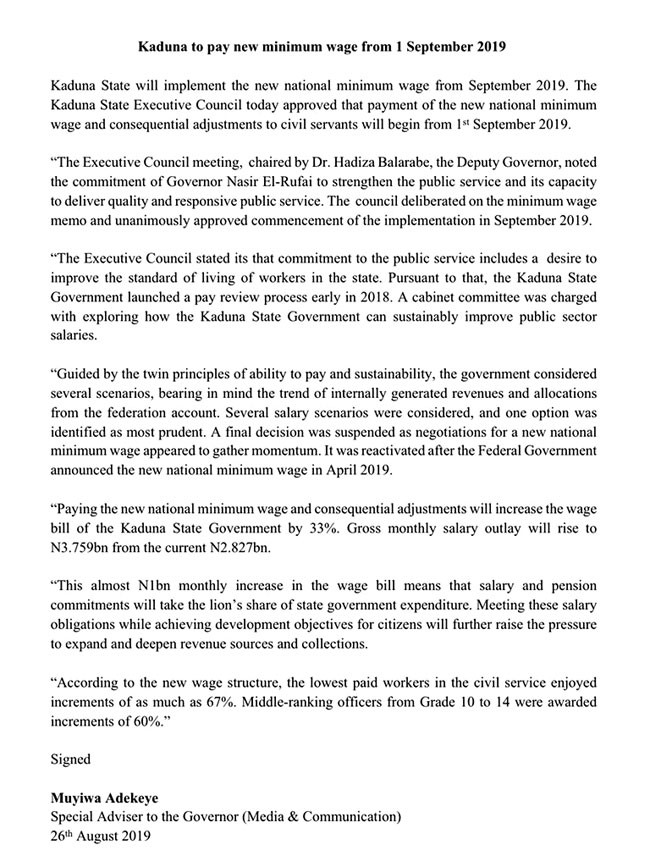