Burna Boy had claimed that Davido had no talent and that he is only enjoying fame because of his father’s influence and wealth.

This led to many Nigerians taking sides on social media with many of them dragging Burna Boy for calling out Davido.

In what appears to be a deleted tweet on her page, Pricilla gave special thanks to God that Burna Boy did not win the Grammy Award he was nominated for. 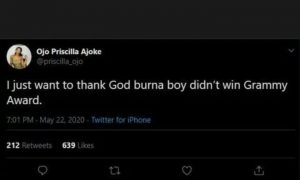 Just recently, it was reported that celebrity barman, Cubana Chiefpriest, took to his Instagram page to defend Davido after he was dragged by Burna Boy.

In a lengthy note penned on his page, Cubana explained how Davido should not be hated because of his father’s money because it has nothing to do with God’s grace on his life.

The barman also mentioned how Davido has been able to uplift several people around him up till the moment that even his gateman started to have social media presence.

Rounding up his post, Cubana said that it is those who God has helped that help others that Igbo people call Odogwu, which means a hero