Nollywood actress and human rights activist, Kate Henshaw has responded to the electoral bribery allegations against her by Abdul Ishakaa. 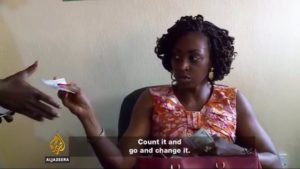 Pictures of the actress giving dollars to one of her staff to package ‘in envelopes for the delegates’ had been released in Ishakaa’s Twitter post earlier accusing Kate of bribing delegates in one of the past elections.

“If something was meant to be hidden, do you dimwits think it will be shown in plain sight? Recorded for prosperity? Sanctimonious so and so.. that is what obtains in Nigeria. Go and try your luck and come back to me you hear? Bombaclats!!!”

However, the truth about the video is that it is an excerpt from a documentary the actress featured in, entitled: “My Nigeria”.

Here is the video.

“I Will Grab Your Butt,” Says Aproko Doctor As He Got Engaged With Chef Amaka

“This Is Not The Moment For Exuberant Celebration,” Says Birthday Boy, Bola Tinubu