Actress Funke Akindele and singer JJC Skillz were pictured for the first time together after their secret wedding last week. On August 24, the new celebrity couple got engaged in a secret wedding that was held in London.

According to sources, Funke Akindele popularly called Jenifa walked down the aisle with her lover of many months, Abdul Rasheed Bello (better known as Skillz) at a registry in London (United Kingdom).

What started with the actress flaunting her two ring bands earlier on Snapchat, and speculations that the duo might be up to something finally came to light that they indeed got married. 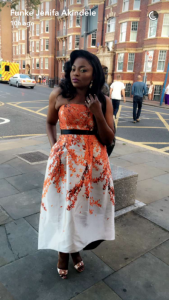 But, because both have been previously married, they decided to tied the knot in secret and out of the prying eyes of Nigerians, added another source.

A colleague of the actress also told our correspondent that, the couple opted for a secret wedding after observing from a distance how rumour mongers almost ruined the wedding of Seyi Tinubu to Layal Holm by exposing their dirty secrets just days to their wedding.

Recall, Funke Akindele was once married to Kehinde Almaroof Oloyede, a property developer in the city of Lagos, while Skillz has four children from three women, and also didn’t enjoy his previous relationships.

The newly wed reportedly got engaged back in February after dating for about a while. Reports of a secret wedding first surfaced in May but neither JJC nor Funke Akindele confirmed the report.