As prostitution continues to increase in Enugu, some students of various universities and higher institutions who engage in the il 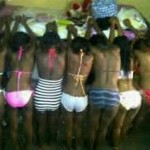 licit trade have littered sexy pictures in big hotels in Enugu in order to get high profile customers.

The correspondent gathered that the students even demand a bribe from some of the officials of the hotels scaring them to display their pictures. A source disclosed to us that the students’ aim of keeping the almost nude pictures in hotels was to seduce people who lodge in the hotels daily.

An official of one of the hotels who spoke to us on condition of anonymity, stated that the students initiated the strategy to enhance their proceeds from prostitution.

He disclosed that once any lodger indicates interest in any of the students, “we contact them immediately with the numbers they gave us.”

It was further gathered that the officials of the hotels draw the attention of lodgers to the sexy pictures of the girls to know if they will indicate interest to meet them.

We further learnt that the decision of the students to keep their pictures in hotels followed incessant raid of prostitutes’ hide outs in different parts of Enugu by security operatives.

Besides the sexy pictures, the students also lobby to be ushers in political occasions to enable them sell their bodies to wealthy men.

Meanwhile, we gathered that security operatives have continued to arrest prostitutes in their hideouts.