The Director of Finance, Bayelsa State Ministry of Special Duties, Federal Project, Office of the Governor, Dr Isaac Ogugu is now embroiled in a ritual mess in his desperate moves to become the Accountant-General of Nigeria.

Dr Ogugu a pastor in one of the winner’s chapel church in Yenagoa left his office and his church to seek spiritual power in Ikere-Ekiti in Ekiti State, to enhance his chance of becoming the Accountant –General of Nigeria, and because of his mother which he tagged a witch, he wrote down the names of his boss in the office and other contenders for the post of the Accountant –General for spiritual affliction and to cast spells on them.

On the day of the ritual, according to our investigation, Dr Ogugu lodged at Havana hotel in Ikere and the marabouts  came to visit him there, at the early hour of the morning he was taken to the notorious shrine where the sacrifice was made and bathed with the human blood, May 26th 2013 was given to him as the appointed date that he will resumed as the Accountant –General of Nigeria, when the date passed and he did not received any letter or calls to that effects he ran back to the spiritualist and another date 15th June 2013 was mentioned as the appropriate date.

We met with Dr Ogugu on 4th June 2013 in his office in Yenagoa Bayelsa state, he first denied the allegation but later opened up to our crew, he narrated how his ordeal started that his case started with one Sunday a pastor, that said he will help him break the unseen pot that has been affecting and deterred his progress since birth, according to him Sunday later told him that his power can not handle the people behind his problem, he later introduced him to Baba Makinde and Aworo at the Ikere-Ekiti shrine, Dr Ogugu recalled the day he lodged at Havana hotel that a big pot was brought out from his  hotel room after which they followed him to Yenagoa and brought out another bigger pot from his bedroom.

About the post of Accountant –General, Dr Ogugu confirmed to us that he went for the examination and interview for the post and he passed, that he will resume as the next Accountant-General of the Federation on 15th June 2013, we want to know the genesis of the crisis between him and some top officials of his ministry before he can brought their name to the shrine to cast spells on them, he was confronted with the contents of the  documents he wrote 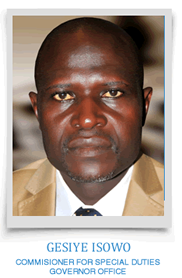 the name of his serving Commissioner and Permanent Secretary,  he said he wrote their names for the spiritualist so that any one of them that did not want his progress or want to be a stumbling block for the post of the Accountant–General  should not have progress, he referred our crew to the contents of the document with an emphasis that “any one that want to be stumbling block for his ambition let happiness be far away from them, so that its not a crisis to me, any one that want my progress will have progress too” he specifically mentioned the name of one Sanni as co contender for the plum job, that the said Saani have more money to spend than him so he has to go spiritual to enhance his chances.

Investigation on the matter continues, we are making frantic efforts to have the views of the Hon Commissioner and his Permanent Secretary on the lingering crisis within the ministry, also other pictures and documents related to the wife and families of Dr Ogugu, the activities and the names of spiritualist that gave Dr Ogugu several unseen dates to attained the post of the Accountant-General of Nigeria will be made public at the end of our investigation