Prophet Israel Oladele Ogundipe who leads Genesis Model Int’l, a parish of Celestial Church of Christ (CCC), turned 40 on March 10, 2015.  To celebrate his birthday, his congregation put together a carnival-like event that lasted for a week.

The pastor’s followers kicked off the birthday celebration on March 10 with a mini ball at the church’s headquarters in Alagbado, Lagos.

The preacher also received a large amount of praise from his own congregation, which described him as “inspirational, compassionate, and humble.”

On March 12, Genesis, as the pastor is fondly referred to, also had a party held in his behalf in London and America by some of his minions based in the two countries.

The climax of the event was on Friday, March 13, when a group in his church called the Israel group hosted the charismatic leader to a surprise birthday dinner held at Rodizzio restaurant and bar, Ikeja, Lagos.

The sumptuous dinner was attended by his colleagues in the vineyard of God, eminent media personality and other well-wishers.

In his remark, the editor of Encomium Magazine, Mr. Tade Ashifat described the celebrant as an “epitome of humility.”

“Today is my first time of meeting him, but I’m mesmerized by his humility. He is a carrier of anointing and I’ve seen that in him in my brief encounter with him today,” he said.

Echoing Ashifat’s line of thought, Pastor Yemi said the pastor is a life changer and “worth emulating.”

“Though I met him two years ago, he has affected my life. He’s a man worth emulating; he won’t wait for you before he affects your life,” he said.

In his thank you speech, the “birthday boy” thanked his host for the love and honour showered on him and promised to be a blessing to the congregation and humanity at large.

“I’m extremely delighted with all what you put together. You have honoured me; God will also honour you with love and every good thing of life. I know that God has touched my life in a wonderful way. May that God that touched my life touch your life for good! And may He continue to use me in His vineyard.”

On how he feels about clocking 40 years on earth, the elated pastor said he gives thanks to the almighty God for giving him the “grace” to witness such a day, adding that God has been the source of his joy and thus deserves all the glory.

Speaking on the significance of the day, he noted that the event has reminded him about the mantle of leadership rested on his shoulder and the need for him not to disappoint God and people. Quoting from Genesis 1:27, he promised to be “fruitful’, multiply and subdue nations”

Having passed through some difficult moments in life, the minster of God said everything has worked well for him to the glory of God and has made him a better person. “Every attack of the devil will bring new level. Everything that has happened to me happened just for me to discover who I am and where I am going to.”

He also recalled that despite the enormity of Satan’s machinations to ensnare him in his ministerial career he has continued to triumph through the power of God. 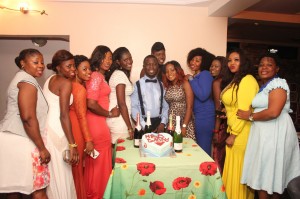 Looking back to 1995 when he met with Christ, he said that was his happiest moment in life and would always cherish and protect such privilege.

Originally, the cleric wasn’t born a Christian. He was named Wasiu, according to Islamic faith of his father back then. Recalling how he got converted into Christianity, he said: “I was born into a Muslim family. But in the long run, my parents got converted into Christianity; Christ Gospel Apostolic Church to be precise. My father is a Deacon while my mum is a Deaconess. I’m the first child of the family. We had a rough growing up and the bulk of the job fell on my shoulder. It was a very funny case how I became a member of the Celestial Church because I never liked the white garment church when I was young. I used to attend one Celestial Church, “Paradise Parish “to play the drums because I’m talented in playing drums. After the service, whatever is given to me, I will take home and that was what we were surviving on. Later on things started getting better. I never liked the church like I said earlier because during our trying times, pastors in my parent’s church were not ready to help us; it was the Celestial Church pastors that stood by us. Subsequently, the gift of prophecy that was inherent in me started manifesting. Then I used to fast a lot. I believe if you deny yourself, fasting will sanctify your body and bring about real purification. And that was how we were brought up in our family; to fast and pray every morning. I introduced that to the church and God started using me.”

Despite having god’s approval, the pastor said he did not start big. But he was never deterred. And one day, something happened which was to change the course of his life forever.

In 1999, he revealed that the first set of people God used him for bought him a land and from there he started his ministry.

Today, with over 3000 congregants, Prophet Genesis is one of the leading CCC pastors whose doctrines and principles are based on the word of God. He has changed the face of his ministry into a corporate and modern ministry, exempting himself from some beliefs of the Celestial and performing wonders.

The pastor has worked for 20 years in the vineyard of God and he is a notable televangelist.

He authored the book “Be Unstoppable and is also preparing for his new book entitled, “Hakuna Matata.”

Happily married, the clergy whose son’s name is “Wisdom” said his quest at 40 is to reach for new boundaries and to help Christians to experience the fullness of God in their lives.