Reality Tv star, Tega Dominic has expressed her frustration over everything she’s been subjected to since exiting the Big Brother Naija show.

Tega in a tweet via her Twitter account on Tuesday admitted that she is not perfect, adding that she is done with negativity and being bullied online.

She further went on to state that she is mentally exhausted.

“I’m not perfect but I’m done! Done with negativity, online bullying and being judged constantly.

“I am mentally exhausted,” she wrote.

It’s unclear what led to the development as everything seemed to be back to normal between her, husband, family members and fans after she apologized for her questionable behavior while on the Big Brother show. 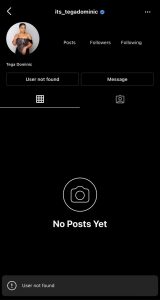 I’m Under Pressure From Politicians To Beg Presidency – Sunday Igboho