Top Nigerian music star, David ‘Davido’ Adeleke, recently got fans buzzing on social media after paying a courtesy visit to one of the monarchs in the country, Oba AbdulWasiu Gbolahan Lawal of Oniru land.
.
The top singer, who is also the son of a successful businessman and billionaire, did not let his status affect things that are expected of him according to tradition.

Davido was spotted prostrating fully to the monarch as the moment was captured in photos. The Risky crooner also paid his respects to the queen, Olori Mariam Lawal

The photos were shared on the official social media page of the Oba of Oniru and it was explained in the caption that the singer visited the palace with a renowned media practitioner and Seyi Tinubu.

Issues were discussed bordering on the prospects and possibilities of tourism and the chance of collaboration was also hinted at. 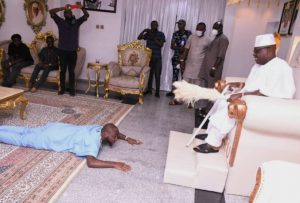 Nigerian Youths Have Spoken But We Need Time – Buhari