Nigerian social media users are not happy Pwith Damini Ebunoluwa Ogulu, popularly known as Burna Boy for saying Davido got his fame on a platter of gold.

This is coming after the DMW Boss, Davido Adeleke declared himself and Wizkid as Nigerian’s Two Greatest Artiste of all-time.

READ ALSO: Wizkid Tears Internet, Got Everyone Talking For Doing This

Davido posted an animated photo of himself and Wizkid on his Instagram page earlier today where he declared himself and Wizzy as the “2 Greatest Of all Time“. 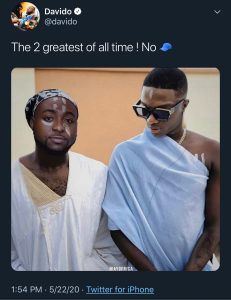 That tweet by Davido didn’t go down well with Burna Boy at all.

On seeing this, Burna Boy took to his Instagram story to drop a bombshell and it was a very messy one.

According to Burna Boy, Davido‘s father bought the fame for OBO

Below is what he posted:- 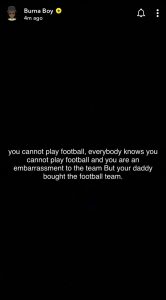 However, this sparked various comments on Twitter. Below are some of the reactions as it didn’t augur well with them.

Burna Boy calls himself “African Giant”, nobody attacks him.

Davido calls himself and Wizkid “greatest of all time”, Burna boy is triggered and attacks Davido.

Imagine attacking a man for being the child of a billionaire.

African Giant with the self esteem of Eran Iya Oshogbo.

If that Burna Boy’s story was really a shade to Davido, then he’s wrong on this one.

David’s father is wealthy yeah, but man has been hustling like no man’s business since he burst into the scene

It’s his hard work and consistency that has brought him this far!

Burna Boy needs to accept that some people are better than him. Plenty people sef. Na so life be. And no be fight. Give it 5 years, a few fresh kids might ‘dethrone’ Davido and Wizkid. Life is turn by turn.

Thought the joke of Davido buying the music industry was a 2012 dead & gone one.. Buying songs doesn't guarantee "hit" but Davido makes it a hit everytime, a rare trait..

His dad being rich is not his fault & doesn't change the fact he is top 2 plus Burna is not even top 3 so?

If I’m rich & my son wants to play ball with no talent. I will buy a club &pay Jose to drill him to stardom. Acquired talent. But he may still not make it if he doesn’t work hard. Leveraging privilege isn’t a crime. Even Burna leverages his grandfather’s history as Fela’s manager

Thought the joke of Davido buying the music industry was a 2012 dead & gone one.. Buying songs doesn't guarantee "hit" but Davido makes it a hit everytime, a rare trait..

His dad being rich is not his fault & doesn't change the fact he is top 2 plus Burna is not even top 3 so?

Davido’s dad doesn’t even support his music from the one set. Man hustled like a slave & his hard work is what he’s enjoying today.

You that relied on twitter influencer before people listen to your Fela’s sampled music now has the mouth to rubbish him. Burna boy should rest!

Burna boy makes too much noise but still hasn't met WF Olamide in ranking not to talk of Wizkid or Davido. He (burna) is just forming foolish stronghead 😂 cos even Davido that is close to Wizkid in rating still STAN wizkid, and that makes people rate him(Davido) more

Everyone knows Davido’s dad tried to ruin his music career from the onset, Davido Hustled for everything he has today.

He may not be blessed vocally but Burna Boy can’t compete with his Discography pic.twitter.com/naHNNIDIaH

Now, Davido says he and Wizkid are the 2 GOATS in Nigeria music and you’re subbing them lol

But is it Davido's fault that Burna's father couldn't afford the football team?

Burna boy will never accept the fact that he’s Davido and Wizkid’s boy.
Burna is good but he should always respect his Grandfathers in the game. 30BG forever😩✊🏿! Make una Dey beef Dey go!