When the Coalition for Social Change (CSC) tried to organize a chorus of thanks for the ex-governor of Akwa Ibom State, Senator Godswill Akpabio, they got more than they bargained for – they got an orchestra. Now they extend the limits of their imagination to keep the different parts of the orchestra going.

The chorus thanks was supposed to be in the form of a Reality Television Show which would give Akwa Ibom people the opportunity to express their thanks to Governor Akpabio in their own special way, using any medium of their choice. It was a novel idea conceived by Akpabio’s former chief press secretary, Pastor Anietie Ukpe.

Says Pastor Ukpe, “Actually the inspiration for the Reality Television Show actually came from a conversation with Jonah Ukoh. Ukoh came with the proposal that given the deluge of appreciation for the uncommon transformation of the state by the then governor, Chief Godswill Akpabio , he could, using his internet savvy, get a million expressions of thanks for the Chief Akpabio on the internet and these would be put in a book form and presented to him.” 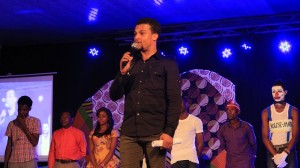 Ukpe says he thought about this and decided that while the online campaign was going on, a more interactive medium of showcasing the appreciations could be considered. He conceived the idea of a Reality Television Show titled, “G7-15 Thank You Reality Show.” He talked it over with some “Akpabiolites” and the idea snowballed into a forum for its execution – the Coalition for Social Change – with Mr Joseph Utin, a tourism expert, as the international coordinator and Mr. Ubong Ekpe, another tourism expert, as the secretary.

In its inaugural meeting, the coalition decided to expand its mandate to include encouraging good governance throughout Nigeria and serving as a think tank on developments in Africa. Utin and Ekpe were consequently sworn-in to their respective offices by a Barrister Nsima Etuk On 6th October,2014 at the Coalition Secretariat and they commenced a series of press conferences and press interviews to sensitize the people on the need to publicly appreciate good governance and those who have done well in government.

The train began to grind forward and a flurry of activities began with Jonah Ukoh mandated to source for a short code which the people of the state would use to assess the performances at the reality television show and send text messages. A time for the show was also negotiated and paid for at NTA Channel 12, Uyo.

To bolster the show, a promoter, Sleek Productions, was brought in to raise money for the project from Corporate Nigeria. “It was assumed,” says Ekpe, “that we needed to leverage on the massive infrastructural development in the state by reaching out to the companies involved in the uncommon transformation to join in thanking the subject of our campaign for having faith in them. So we asked a promoter to see to the aspect of raising money for the television show from Corporate Nigeria. But nothing came from that end and we had to squeeze water out of stone because our dreams were pretty big.”

Engr Etido Inyang, then Special Adviser, Bureau of Technical Matters, was brought into the project and he became an instant asset. Says Ukpe, “Engr Inyang is a fine specimen of a gentleman and he was at the epicenter of the uncommon transformation of the state as a project management professional of the purest dye. The coalition acknowledged his great attitude and commitment to the state and reached out to him. He was a great moral boost. Many individuals also contributed to the project when they heard of its lofty goals.”

The first elimination show in Eket Senatorial District was a masterstroke. Tens of hundreds showed up and the show was electric. The chairman of Eket local government gave the council hall for the exercise and was personally in attendance. Dances, songs, poems, jokes…all in appreciation of what Akpabio had done. The judges could not believe what they saw. This would be replicated in Ikot Ekpene Senatorial District, where the Chairman of Ikot Ekpene also gave the council hall for the show. Then the mega event for Uyo Senatorial District took place at the Civil Service Auditorium courtesy of the Head of the Civil Service. The depth of talents was unbelievable.

Says Utin, “Credit must be given to Sleek Productions, which provided some technical support for the shows by bringing in people like Nollywood actor, Kim Bassey, as master of ceremonies. Jonah Uko provided the internet support though he failed to drive his dream of getting a million messages of appreciation.”

With the participants trimmed to a more manageable size the race to sort out finalists began. The coalition solicited Ukpe’s help in reaching an understanding with Akwa Ibom Broadcasting Corporation and the Nigeria Television Authority Channel 12 for the airing of the show daily. He contacted the stations. After previewing the events, they readily aired it at different times in their stations. It was an instant hit in the state.

An excited Utin purrs, “The show was so good, in fact, it was of the highest possible standard. It was so good that someone who was not even part of the Coalition tried to hijack it for monetary gains. We were not involved in this for money, we just wanted to do something which would challenge future leaders to strive to reach for the moon too and do the best for their people. But some people had money in their minds. They sought to steal our dream.”

How did they checkmate this? Ekpe intoned, “We called a meeting and discussed the progress so far. Then we took steps to protect our dream from dream stealers. We let them know that what God gave to us, no one can take away.”

The coalition intends to wrap up the finals of the show on by July ending with prizes given to winners. It hopes to air the show live on AIT and NTA International. But Ubong says there is a pleasant twist to it, “We want to also use the show to hail the emergence of Governor Udom Emmanuel, who has put the right foot forward since his emergence as governor. The show’s talents want to infuse their hope and faith in Mr Emmanuel into their acts. They still intend to thank Senator Akpabio, of course. They want to kill two birds with one stone.”

There is a frenzy of activities as the buildup to the show begins. Utin wraps up the sentiment thus, “This is not about Senator Akpabo, it is a celebration of excellent, visionary and pace-setting leadership exhibited by him. This show is, therefore, one small step in appreciation of visionary leadership but a giant leap in the encouragement of democratic development in Nigeria.”
Wale Abiodun is the Publisher of www.Prestigeonline.org and Public Affairs Analyst.

Wizkid Reveals What Makes Him Happy

Fans React As Davido And Chioma Started Following Each Other Again