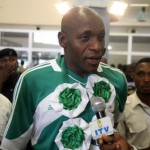 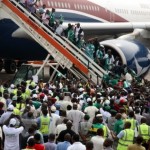 The Super Eagles under the tutelage of Coach Stephen Keshi have ended a 19-year Africa Cup of Nations title drought with a 1-0 final victory over Burkina Faso at Soccer City, Johannesburg.

Home based Sunday Mba’s goal gave the Super Eagles a deserved 1-0, 40 minutes into the first half.

It was an opportunist goal by Mba and his second of the tournament, having struck a superb match-winner in the 2-1 quarter-final defeat of pre-tournament title favourites Ivory Coast.

Among the rewards for the Super Eagles is a $1.5 million first prize and a place at the FIFA Confederations Cup in Brazil, where they will face world and European champions Spain, Tahiti and Uruguay.

It was a result that took winning coach Stephen Keshi into the record books as he equalled the feat of late Egyptian Mahmoud El Gohary by winning gold medals as a player and a coach.

The dominant Super Eagles made the breakthrough just before half-time when Mba clipped the ball over Mohamed Koffi and then volleyed into the far corner.

Ahmed Musa slipped as he looked set to score and Victor Moses almost poked home as Nigeria eased to victory.

It was a win that was fully deserved as Nigeria comfortably beat a tired-looking Burkina Faso, who struggled to make an impact in their maiden final appearance.

The match was also the first time for 21 years that a black African coach has won the cup – Cote d’Ivoire’s Yeo Martial was the last to do so in 1992.

After Nigeria and Burkina Faso played out a 1-1 draw in their group match early on in the competition, the Super Eagles had grown in stature and went into the game as favourites

Reacting to the victory, the winning coach Stephen Keshi, stated that “winning this is mainly for my nation – when I came on board a year and a half ago my dream ws to make all Nigerians happy, and to construct a great Nigerian team, We are not there yet, it’s still in process.

“You don’t want to know what was going through my head (in the final five minutes)! To represent Africa in Brazil at the Confed Cup is an honour for Nigeria.”