FBI Director James Comey has described Russia as the greatest threat of any nation on earth. Comey said this during a Senate hearing where he discussed the ongoing investigation into Russian influence on the 2016 US election.

The FBI boss revealed to the Senate that Russians have been interfering in American politics and  have continued to do so recently. 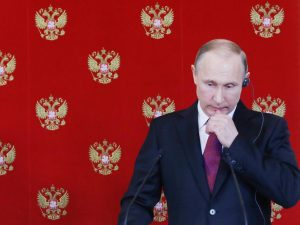 “One of the biggest lessons learned is that Russia will do this again. Because of 2016 election, they know it worked,” Comey said of the threat that Russia might try to influence future elections.

Also, recent news has it that the Russian government, led by Putin, has banned the activities of Jehovah’s Witnesses in the country, hereby impeding their freedom of worship.

However, world leaders such as the president of the United States of America, Donald Trump and other religious leaders and group have all condemned the act, stating it as threat to freedom of worship.

Davido To Single Guys: “Don’t Try To Fuck Her, Make Her Want To Fuck You”